This is a love story

Posted on August 6, 2014 by progressivelychallenged

I’ve owned two cars. They were both filled to the brim with character. Each other’s polar opposites. And pieces of junk. And I loved both more than one probably should an inanimate object.

My first car was a Ford Taunus 17M 1971 bought for about $200 and that included four new spare tyres. 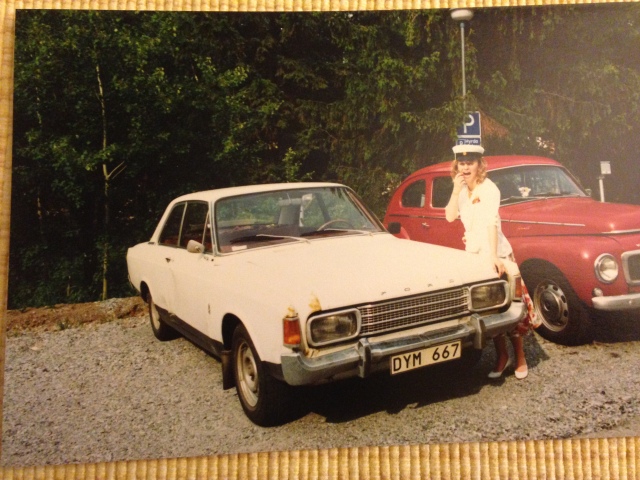 Yeah that’s me. Pulling hair out of my mouth, awesome. And now it’s on the internet. You’re welcome. It was actually taken on my graduation, hence the hat. And note it’s a photo of a PHOTO. There were no digital cameras back then, not mainstream anyway.

The owner came up to Stockholm in the car, saw something he liked better, bought it, and was left with this wagon of a car and needed someone to just take it off his hands so he could drive back home.

The shift stick was initially just an iron pipe slid on top of the 5 cm stick that was left after it broke a few years earlier. The boyfriend welded a new shift stick for me so it was slightly safer.

Also, in winter I not only had to scrape the windows on the outside of the car but also on the inside. Aaaah the memories. “Skorpan” was its name, makes no sense in English but the closest it translates to may be “Crusty”. Gosh I loved that car.

One day Skorpan drew its last breath. It was taken to the junk yard. I cried for a whole day and saved the car key. I still have it.

That’s my car. It was so cute I died every time I looked at it. Just about. “A love stronger than thousand deaths…” Ya, a poet I am not.

A better picture of a Fiat 500D (same model but not my actual car, and I didn’t have a sunroof). See how the door handle is up front. See the adorableness. That’s a word. Now.

It was deserted in an industrial yard where the boyfriend and I used to take our evening walks and I would see it almost every day, through the seasons, and entirely snowed under in winter without any cover. One day we had enough of seeing that awesome little car so unloved, we managed to track down the business owning the yard and then the owner and he was happy to sell. It was one of the proudest days of my life, owning that piece of junk.

The floor was rusted through so I could see the road when driving. The door hinges were behind the seat rather than by the rearview mirrors so it opened opposite to what you’re used to, suicide doors I believe they called them.

I could get the speed up to 100km/h on the freeway if going downhill. The car would then shake and rattle so badly I always expected nuts and bolts to fly off. I called it “Smulan” (“Crumbs”) because it was so much smaller than Skorpan (“Crusty”).

People would congregate around the car and older generations of people would stop me and tell me stories about their old Fiat 500s. I once had a cortege of Italian motorcyclists all beeping me and waving as they passed me on the freeway. Good times.

I had to leave it behind when I moved countries. I still mourn the loss of that car.

Then today this arrived at my door step.