Posted on June 10, 2014 by progressivelychallenged

Bubba has been slightly more cooperative this past week, or to be fair, more settled. So it’s been a bit easier to get stuck in to the boxes. We also had a long weekend so husband was home for an extra day to take her off my hands and that’s always helpful. So here’s the current situation.

Bubba’s room. No change since last week but the blinds arrived today which means I can install them and she can move in. Will probably do that on the weekend.

Master bed. Quite cozy now. Chucked a rug on the floor that I’ve had for a fair while although never used. It looks nice in there now although there’s heaps to do before it matches my vision. But it’s fully functional and that’ll do while I attack the rest of the house. 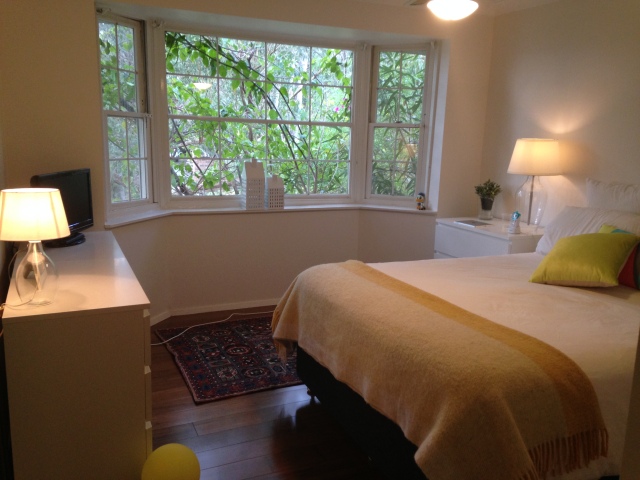 Guest room. No change. With bubba moving out and in to her real room we can now finally buy the guest bed and start making this room functional for visitors.

Bathroom. No change. There is plumbing work to be done here, nothing too exciting at this point, just making it more functional for Phase 1. The plumber was here last week to have a look and make a shopping list of what he needed for all the little jobs I got for him. He did however fix our shower on the spot. The water pressure was so weak we could barely get wet under it. True story. And it took minutes, not exaggerating, to regulate the temperature. It was frustrating. He took one look at it and fixed it while he was on the phone! It was that easy. A bloody water saver. Now the pressure is so hard it rinses my hair in a couple of seconds, and the temperature can be set in just two turns on the taps. This is the lovely lovely plumber I spoke about last week. And as it turns out he’s actually as lovely in real life as on the phone. And obviously skilled. Looking forward to his return to fix up everything else. A few leaks and annoyances about the place.

Dining. Entirely void of boxes now. I moved the bookcase pieces in here since they’re supposed to live here once I find the darned screws and can assemble them. I actually called Ikea (where they were bought) and as it turns out I can’t PAY for new sets of screws but they will just give them to me, even though it’s my fault I lost them. IF they have enough screws that is. And between these two bookcases I need two sets of 108 screws and dowels. Ya. That’s 216 freebies. Unsure of my success rate there. But kudos to Ikea for offering.

Table is still a mess. We have a history of Horisontatitis.

The side of the dining room is looking decidedly nicer with the desk we pulled out of a neighbor’s garbage when we were still in the unit (yes, we are THOSE people). The blue stuff is tarp that I put on the floorboards before movers plonked the fridge down hoping it’ll protect the new floor at least a little. The chair is one of two that oddly enough came with the house.

Entry. We put our old hall table in there. Doesn’t really fit but makes it slightly more functional for now. Somewhere to drop keys, wallets and the likes. And chuck shoes.

The piece of paper on the wall is the ToDo list for the electrician. I had another one for the plumber but he was so excited about getting a list he took it. Gotta love a fellow OCD person.

Living. I need to learn to take photos first thing in the morning before bubba makes a right mess. This space is now heaps more functional and family friendly. Bubba has more play space and room for her toys where she can play near us (she won’t play in her room yet) after I moved the sofa backwards and laid her shelf down just like it was in our previous home.

Study. A glimpse of my haven. It’s nowhere near my vision for this space yet but for the first time in about two years I have a dedicated area for just myself again. From this spot I can see the valley and I’m sitting here right now. Is sooo good.

If I turn around though I see the rest of the boxes.

And there is a similar sized pile of boxes still in the living area which I for some reason neglected to take a photo of.

Kitchen. No change. Still messy but we can find everything and it’s possible to cook in there so it’s a minor win. Well actually. I bought a shelf at Ikea the other night to put in the fridge cavity where the fridge is supposed to go. Our fridge is however about one centimeter too wide to fit so it will live in the dining room until further notice. This shelf allowed me to make up for the shallow shelves a little and I could put large mixing bowls and other random stuff in here. It’s not pretty. Gosh how I long for pretty!

And finally the laundry. Bought two shelves of the same kind that I put in the fridge space in the kitchen, just lower, and that sorted out the laundry quite well for now. I couldn’t get anything higher because that would’ve required attaching them to the wall, which isn’t possible at this stage due to the asbestos.

I am working towards a functional home at this point only. Once that is achieved I will start working on “pretty”. Can’t. Wait.