Posted on June 1, 2014 by progressivelychallenged

I’ve ordered blinds for bubba’s room so that we can move her in there now that the neighbour’s backyard works have ended and there is no longer any noise at the back of the house. She’s been in the guest room at the front of the house since we moved in for that purpose.

I didn’t feel comfortable putting the blinds up with the window in her room being in quite the state. The photos are poor, apologies for the quality.

First there was this wonky wooden board nailed AND screwed into the top of the frame, I’m assuming to hide the curtain rod arrangement behind it which was a pipe resting on three hooks. There were also old fittings left behind from what I think may have been previous blinds.

The screws were stripped so that took some extra work before I got them out and could pry bar the board off. 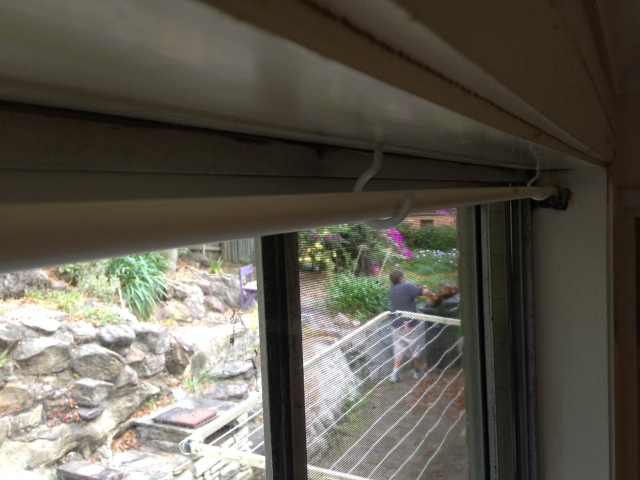 I thought it looked better already until I saw this.

It took a bit of scrubbing. Actually, it took a LOT of scrubbing but it’s clean now and ready for sand, spackle and fresh paint. But most importantly, it’s now clean for the blinds to go in once they arrive, and clean for my bubba so she can move in here.

Spoiler alert: the sand spackle and painting won’t happen right now. Trim is something I love to procrastinate on getting done but we’re still unpacking and that has highest priority right now even though I did take a little detour to prep this window. I believe that’s also procrastinating, unpacking-procrastination.

Don’t worry, I’ve got it under control.

This entry was posted in Nursery. Bookmark the permalink.