Posted on May 5, 2014 by progressivelychallenged

This is a post about FLOORS. See what I did there?

So we’ve settled on the house and got the keys last Friday. Which means

WE OWN A HOUSE

Anywho. For the most part the house has got wall to wall carpet. We want wall to wall floorboards. So we had a floor man in yesterday morning to quote installing said floorboards, and I’m not kidding guys, the quote literally floored me (hence the poor title, what can I say), but we accepted the quote and now it’s on. Gotta spend the husband’s hard earned money somewhere, right?

So to save a measly amount of moolah I will do the prep work myself so I started tearing into the existing carpet yesterday afternoon. I TOTALLY Googled how to do it and read about half a dozen web sites and even made a shopping list for tools based on their recommendations. Went and bought EVERYTHING they all recommended and arrived at the house pretty much armed to the teeth. 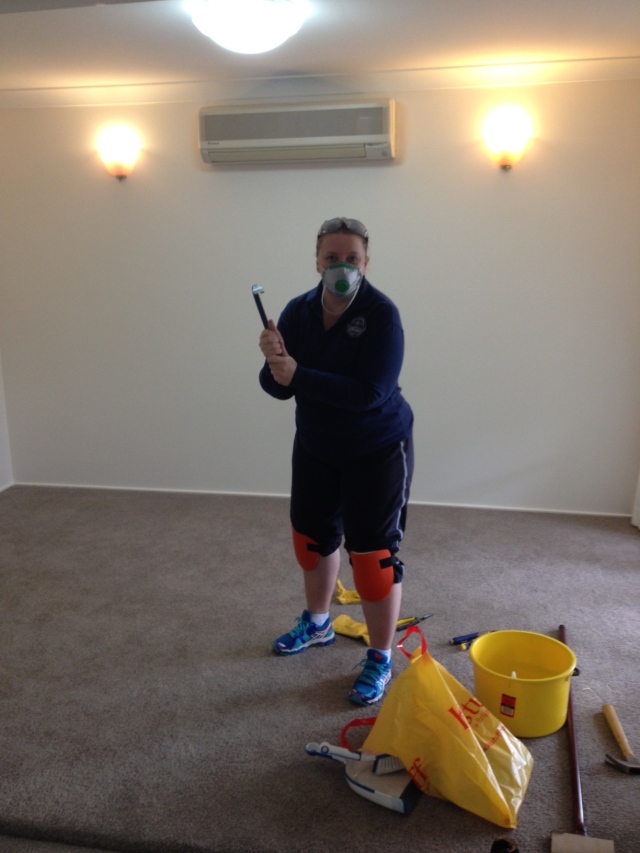 I realise you can’t actually SEE my teeth. But trust me. They’re armed.

And once again I would like to thank the Interwebs for allowing me to post questionable photos of myself publicly.

And that’s a flat pry bar I’m holding. Barely used it. And those knee pads came off real quick too. But the rest of the stuff I bought; Used. Every. Single. Tool. Love Google so much it’ probably isn’t entirely healthy.

Sooo, moving on. Not much to tell really. I tore into this room I’m standing in in the photo above. It used to be a dining room but it will become my study. I found cork underneath the carpet, which I apparently need to remove according to floor man, and it’s GLUED to the floor. Like. Very. Well. When I tried prying it off it came off in thumbnail sized pieces. (Did you just look at your thumb?) So that’ll be an adventure all by itself. All other areas have some sort of floorboard underneath so that’s pretty straight forward. Tearing up the carpet and underlay is a piece of cake, just muscle, but nothing technically challenging. It’s just those darned staples holding the underlay in place that now have my arm aching like buggery. But we are house owners now so major physical pain for one dollar of gain is now what we do.

I managed to get through two rooms yesterday. Entirely stripped of carpet, underlay and a myriad of staples. Oh, and a cricket, not to forget the cricket (the house has been standing empty for a couple of months so I doubt Jiminy is the last creepy crawly I will find as I tear into stuff).

When you lift wall to wall carpet you will find this around the entire perimeter of the carpet. 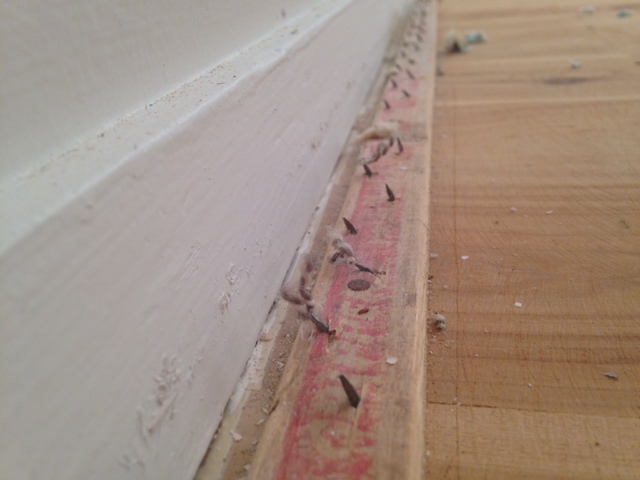 I KNOW! How scary is that?! I started removing the needle strip just to find it crumbles. And breaks. And spits needles. And takes FOREVER to remove. At that point I found out that floor man actually removes them FOR FREE as long as all carpet, underlay and staples are gone! (Cue angels chorus). I love floor man.

Unfortunately I don’t have a good photo of bubba’s room before I started ripping and tearing. But this is after. I like after. 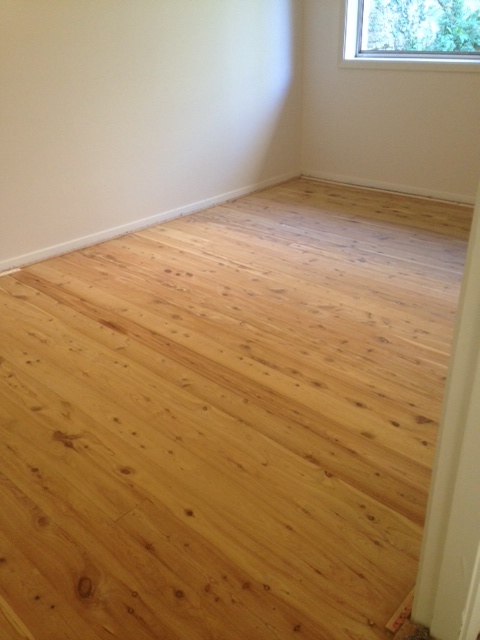 This is the guest room before. 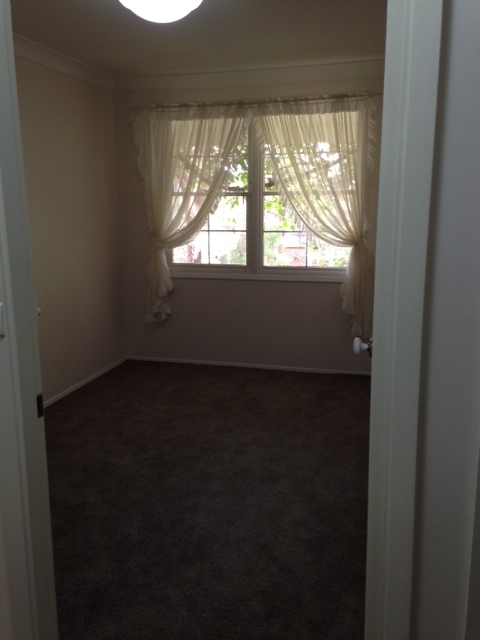 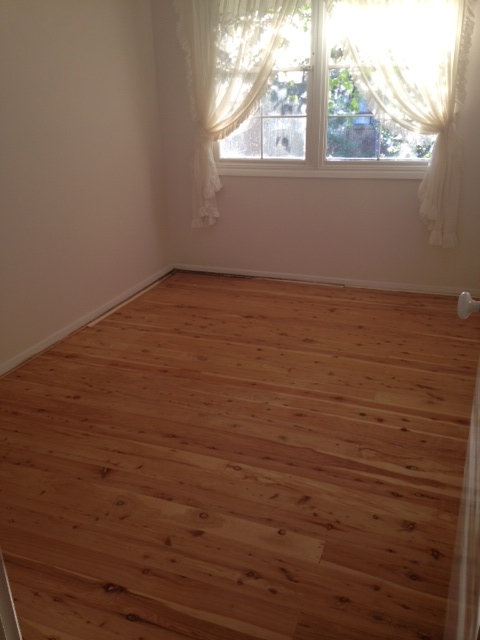 Something happens to the light when the carpet is removed. Rather glorious I think. So for those of you that will venture to our cricket infested (ok, one, there was one cricket) abode to come stay with us, this will be your room. Lacey curtains and all. YOU’RE WELCOME!

Two rooms down, the whole rest of the house to go.

This entry was posted in Guest room, Nursery, Reno. Bookmark the permalink.