Posted on November 24, 2011 by progressivelychallenged

We actually had some progress today. Unfortunately not kitchen related but still, reno and baby related and we take what we can get in this house.

As mentioned here our toilet recently stopped flushing unaided. Before that happened we already had plans to bring in a plumber to baby-care-friendlify a wee bit.

This was the bathtub tap.

Fully functional although not entirely aesthetic. And I’m not even going to start on the tiles! The bathroom is our lowest priority because despite the difference in taste between the former owner’s and ours, it is fully functional (or was, until toilet busted) and a tricky space to renovate being it’s the only bathroom. We would have nowhere to go wee-wee if it’s ripped apart in a reno, hence the intentional (for once) procrastination on that reno.

But for the baby I really wanted a handheld showerhead thingy in the tub. It would also make cleaning the bathtub much easier. We don’t use the tub currently but it obviously still gets dusty and needs a rinse occasionally and up till this point it’s been a bit of a pain to do that with a fixed wall tap. I actually bring out a bucket, fill it up and pour it over the edges and sides after I scrubbed it. With a handheld shower the scrub-rinse process would be much quicker and easier.

So we called Paul. I found him in the Yellow Pages and can highly recommend the man, who wasn’t just happy to come out and listen to me talk about “handheld shower thingy tap” but also came back to finish the job within a couple of days. (We were lucky. He was waiting for parts for another job and could fit a little job in, otherwise we would’ve had to wait for a couple of weeks. Good tradesmen are busy people).

I also showed him our toilet and told him about the no-flush situation. I also had another issue with it. The toilet seat.

You wouldn’t be able to see in this photo (thankfully) but no matter how much I cleaned, it just never LOOKED clean. Oh don’t you worry. With the amount of chemicals that I used on it, it was CLEAN-clean. It just didn’t LOOK clean and was constantly freaking me out. So I said I wanted a new toilet.

He had a squiz and a poke around and said – no. He said he could exchange all washers and seals on the unit (5-7 of them for about a $30 total) and get a new toilet seat, but that a full toilet exchange was unnecessary since the bowl and cistern are in great shape and don’t have a single crack or chip anywhere. And that it would save us a few hundred dollars. Seriously?! A tradie that tells you how to make the job cheaper? So we love Paul. And went with his advice.

I told him I needed very detailed specs for what I needed to buy, including the correct terminology, to bring back the right stuff for him to work with, but he even did the shopping! We love Paul.

I left him to his business, except for a couple of sneaky during-photos. 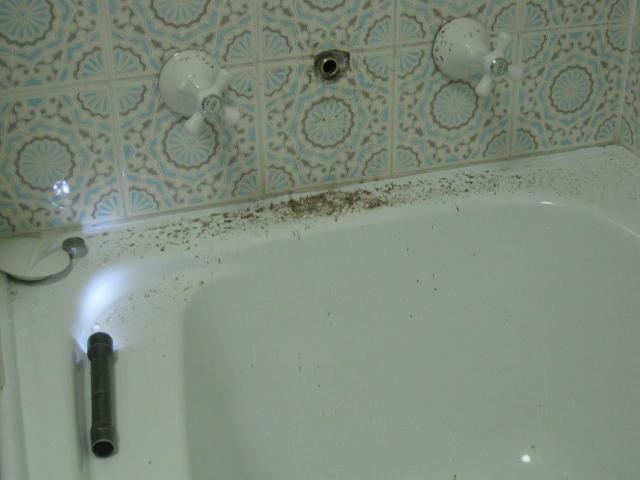 And this is the end result. Again. Please ignore the tiles. I know it’s difficult but try.

I’m stoked! I’m now going to try to find the same hose/showerhead thingy kit Paul bought, to put in our shower, which I may or may not show you another day.

And the newly seated, sealed and washer-ed up toilet.

You wouldn’t be able to see any difference. But he exchanged 5-7 washers/seals, exchanged toilet seat and shortened a hose that does whatever it does to tidy up the look of it all. 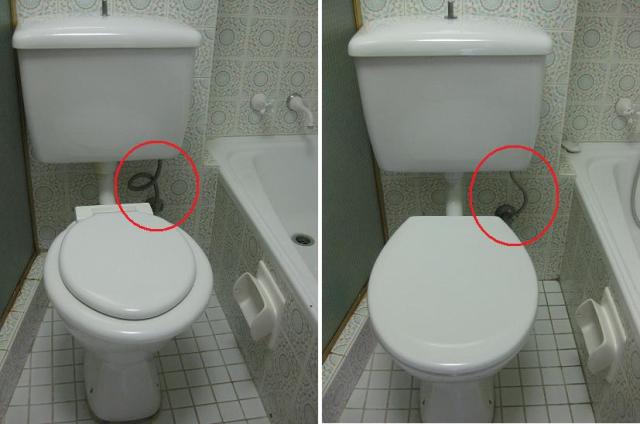 But the new toilet seat even unclips for easy cleaning. And toilet FLUSHES again. And it looks clean.

This entry was posted in Bathroom and tagged bathroom, reno. Bookmark the permalink.